Helpful information toward a better understanding of the calendar systems in Ancient Kemet. 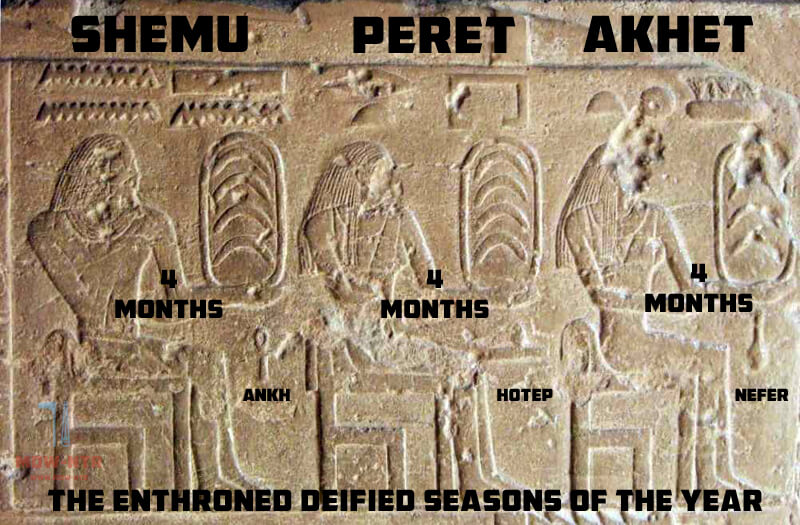 Unlike today’s dating methods where we count the years in sequence from a fixed historical point, the Remetch began calculations from a king’s ascension to the throne. Using this system in the United States of America, we would refer to the year 2016 AD as “Year 8 of President Barak Obama” rather than 2016. The dating method was commonly expressed in the form of: the year

    followed by the number, the month

Dates in the reign of a king were usually presented as:

HAt-sp « regnal year ». It is composed of the signs

. The sign   can represent the words rnp « year », snf « last year », or HAt-sp « regnal year » which itself is the first sprout from a root or seed with a bud attached to its side. This is usually followed by the number of the regnal year, for example

HAt-sp 3 can be translated as “regnal year three.”

Smw ‘shemew’ « harvest ». The quality of harvest depended on the annual inundation of

spdt ‘sepedet’ « Sirius Star ». Sepedet is visible in the Nykemet night sky for most of the year, but during a period of about seventy days in late spring it does not rise above the horizon; then, in mid-July, it reappears above the horizon just before sunrise. This event occurred once every solar year and was called

prt spdt ‘peret sepedet’ « emergence of Sepedet ». The year began on the first

Axt ‘akhet’ « inundation » season. The first day of the year was called

Each season was divided into four months (

sw ‘days’). The months have names but were commonly referred to by their numbers and the season in which they fell. Months and days were given in three parts: (1) the sign

Abd 3 Axt sw 10 “third month of inundation, day 10.” The following table lists the names of the months first attested in the Middle Kingdom as they were designated in the region of

mn-nfr ‘Men- Nefer’ « enduring and beautiful », “Memphis.” Each month is named after a festival that occurred in the following month:

In the New Kingdom most of these month-names were changed, in many cases to reflect festivals celebrated in the region of

wAst « Waset » “Thebes.” The new names survived into Coptic and are still used in the religious calendar of the Coptic church:

This combination of seasons, months, weeks, and days resulted in a year of 360 days however, the Remetch knew the full year consisted of 365 days. Five more days were added to the end of the year which was after 4 Smw 30 and before the beginning of the year which was 1 Axt 1 to compensate for the discrepancy. These fives days were called

5 Hryw rnpt ‘5 heryew renepet’ « the 5 over the year ». Egyptologists call these days, Epagomenal (added) days. Each of these days was celebrated as the birthday of a particular divinity: (1)

mswt nbt-Hwt ‘mesewt nebet-het’ « birth of Nebt-Het ». The first of the year also being celebrated as

Each day was divided into 24 hours (

grH ‘gereh’) with the day beginning at sunrise. The difference between the words

hrw ‘herew’ « day » is the latter deals with the literal daylight hours and the former deals with a complete 24 hr cycle used in dating formulas. Hours may be further divided into moments or minutes called

There were two calendars in use throughout the history of Kemet: The Civil Calendar and The Religious Calendar. The civil calendar functioned mainly for administrative purposes. The Civil year was called annus vagus (“the wandering year”) by the Romans because of its characteristic feature of wandering across the seasons. There is no correspondence between the “seasons” of the Civil calendar and the natural seasons. In fact the Civil year is not always fixed to the same days nor to the same seasons, but it goes backwards across the natural seasons (and also across the Religious calendar), due to the difference of days with the cycle of the sacred star Sirius/ Sothis. The civil calendar was based on a year of 360 days with five added days inserted between the end of one year and the beginning of the next. There were ten days to a week, three weeks to a month, four months to a season, and three seasons to a year. The dating method was commonly expressed in parts: the year, the month, the season, the day, and the royal titulary which includes the name of the king.

In this example we have: