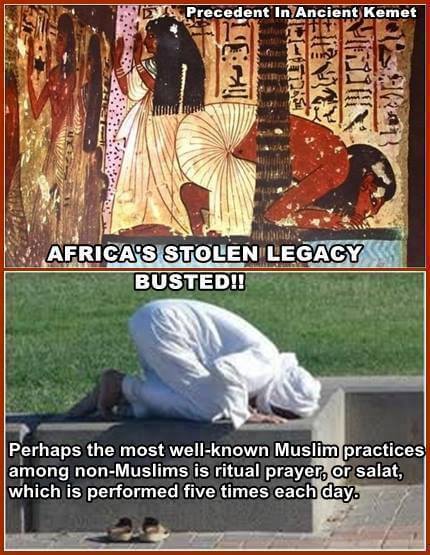 There are a few pictures circulating on the internet such as this to the left, making the claim that the Muslim’s Sujud prayer position is stolen from Kemet.  Such pictures with this comparison are misleading and inaccurate.  Although the two pictures appear alike, the top figure is that of a Kemetic person drinking water from the edge of the pond under the shade in the Necropolis or Underworld.  The bottom figure is that of a muslim in the position of Sujud performing prayer.

When a Muslim prays or thanks God he does so in the same fashion that was taught to Abraham, Moses, Jesus, and all of the previous Prophets of God. You will find that when a Muslim prays he places his forehead on the ground in total submission to God:

For the muslims, the act of prostration during prayer preceades Islam and was already part of the tradition in Judamism and Christianity where you will find many biblical references of prophets falling on their face and praying.

“And he (Jesus) went a little farther, and fell on his face, and prayed, saying, O my Father, if it be possible, let this cup pass from me: nevertheless not as I will, but as thou wilt.”

“And when the disciples heard it, they fell on their face, and were sore afraid.”

“And Abram fell on his face: and God talked with him, saying,”

“Then Abraham fell upon his face, and laughed, and said in his heart, Shall a child be born unto him that is an hundred years old? and shall Sarah, that is ninety years old, bear?”

“And Moses made haste, and bowed his head toward the earth, and worshipped.”

“And Moses and Aaron went from the presence of the assembly unto the door of the tabernacle of the congregation, and they fell upon their faces: and the glory of the LORD appeared unto them.”

“And the LORD spake unto Moses and unto Aaron, saying, Separate yourselves from among this congregation, that I may consume them in a moment. And they fell upon their faces, and said, O God, the God of the spirits of all flesh, shall one man sin, and wilt thou be wroth with all the congregation?”

“And Ezra blessed the LORD, the great God. And all the people answered, Amen, Amen, with lifting up their hands: and they bowed their heads, and worshipped the LORD with [their] faces to the ground.”

“And he said, Nay; but as captain of the host of the LORD am I now come. And Joshua fell on his face to the earth, and did worship, and said unto him, What saith my Lord unto his servant?”

“And it came to pass, while they were slaying them, and I was left, that I fell upon my face, and cried, and said, Ah Lord GOD! wilt thou destroy all the residue of Israel in thy pouring out of thy fury upon Jerusalem?”

“And Jehoshaphat bowed his head with his face to the ground: and all Judah and the inhabitants of Jerusalem fell before the LORD, worshipping the LORD.”

“And it came to pass, when I prophesied, that Pelatiah the son of Benaiah died. Then fell I down upon my face, and cried with a loud voice, and said, Ah Lord GOD! wilt thou make a full end of the remnant of Israel?”

As we can see, the claim that muslims “stole” their prayer or position of prostration from Kemet is misleading.  There is no reason why muslims would need to go to Kemet to steal prayer positions when they are documented in previous scriptures that muslims are told to go back and refer to.

As for the Kemetic figure, we see a man kneeling at the edge of a pond drinking water under the shade of a palm tree in the underworld.  This picture is common and found in various tombs as portions of the Pert Em Heru aka The Book of the Dead.  This particular scene is from a chapter within the Pert Em Heru called “Chapter of Drinking Water in God’s Domain.”  This theme is also found in Coffin Texts (Spell 359) where there is a focus on drinking water not to get burnt by the fiery lakes in the underworld. The recital of Chapter LXIII enabled the deceased to avoid drinking boiling water in the Duat. The water in some of its pools was cool and refreshing to those who were speakers of the truth, but it turned into boiling water and scalded the wicked when they tried to drink of it.

Chapter for drinking water in God’s domain. May the great water be opened for Ausar, may the cool water of Djehuty and the water of Hapi be thrown open for the Lord of the horizon in this my name of Pedsu. May I be granted power over the waters like the limbs of Setukh, for I am he who crosses the sky, I am the lion of Ra, I am the slayer who eats the foreleg, the leg of beef is extended to me, the pools of the Field of Reeds, limitless eternity is given to me, for I am he who inherited eternity, to whom everlasting was given.