There are several claims being made related to the word Hotep. 1) Hotep is a foul word. 2) Hotep doesnt mean peace. 3) Hotep is used out of context.  Are the claims true? Is there any support for these claims?

The above video is from a Google+ Hangout dated February 27th 2015 and posted on Youtube.  Its content is another example of why the serious academic study of ancient Kemet is necessary for proper understanding of its history, language, and culture.  In the video, Sango of the “Black Lotus Society” misinforms a panel consisting of members of the Hebrew belief system who themselves are ignorant of Kemet, its language, history, and culture.

The subject matter at hand concerns the “proper” pronunciation and interpretation of the Ranykemet (Ancient Egyptian) word transliterated as Htp, often pronounced in modern circles as HOTEP.  Sango makes the claim that scholars have this term all wrong and this is evidence of the short-comings of an academic approach to the study of ancient Kemet.  He claims that the word Htp MEANS “sacrifice” and goes on to give the example using Imhotep’s name to mean “with the sacrifice” [3:00].  He seems to be unaware of the dozens of words that use this consonant sequence (h-t-p).  Concerning the word Htp being used as a greeting, Sango takes issue with this.  In this interview, Sango makes the statement that, “I [Sango] blame the Afro-Centric community for taking this ‘foul word’ and making it a stylish greeting” [1:31].  Therefore, Sango is of the opinion that:

We will demonstrate simply why, yet again, the Black Lotus Society is spreading misinformation and why the credibility and integrity of their so-called “initiatic circle” should be called into question.

Firstly, as stated before, there are many definitions for the word Htp; one which includes the meaning “sacrifice.”  A few examples are seen below:

As we can see, to say that Htp MEANS “sacrifice” is to be ignorant of many primary and derived meanings.  You can say, “One of the meanings of Htp is “sacrifice.”  But you can’t say THE meaning is “such-and-such” because the consonant cluster is used for various words.  With that said, we also find Htp “peace” [Wb III 194].  So Sango’s assertion that the word doesn’t MEAN “peace” is wrong.  But let’s not stop there.  As scientists, we are thorough.  Let’s go to the primary texts and get context.  We have a variant of the term with the –w suffix rendered: Htpw “peace; contentment” [Wb 3, 192.17-193.8].

From the Mastaba of Seshem-Nefer (line [1])]

“He may walk in the beautiful paths in a very nice peace, the head of the records clerk of the king Seshem-Nefer.”

From the Mastaba of Ptah-Hotep Saqqara, west of the Step Pyramid, architrave fragment inscription (line [x+2])]

“He may walk in the beautiful ways in which the venerable walk in peace, the head of the dining tent of the palace of Nefer-Hetepu.”

The word Htp “peace” is a derived form of the following variations:

The idea of “peace” comes from the notion of “sitting down,” “resting,” “to set” (down), “to lie down,” etc.  When something is “still” and at “rest” (e.g., like someone sleep), then one is “peaceful, content, calm, tranquil”; all meanings of Htp.  Sango could have easily looked in a dictionary.  If he needed confirmation in a living African language, he could have consulted the  Kalenjiin, which is a community who actually descended from ancient Kemet.

The H- in the word Htp is a prefix.  It survives irregularly as a /k-/ in Kalenjiin and can be seen in the following terms:

Reflexes of this term can be found in Yoruba as dúbu “to lie across or athwart” (diagonally, crossways); ṣubú “fall down” (d > s); dubulẹ̀ “to lie down.” Here, M-E /H-/ no longer exists, and M-E /t/ becomes Yoruba /d/. M-E /p/ becomes Yoruba /b/ as we saw with the Kalenjiin dialectical form where /tep/ is /teb/. (M-E = Middle Egyptian)

Here is the name Imhotep and its variants in Sesh Medew Netcher (Hieroglyphs):

The first sign designated as M18 is a combination of reed leaf (M17) and legs in motion (D54).  This sign is a logogram which stands for the verb ii «to come».  We see this sign used in many inscriptions with a famous instance being the name of Nefertiti nfrt ii.ti «the beautiful one has come».  This sign was completely ignored by Sango.  The next sign designated as G17 is an owl. Sango states that this sign stands for “with or for” but he failed to mention the other meanings it represents.  This sign stands for a common preposition m «in».  English often requires other translations depending on how it is used:

The above meanings were not mentioned by Sango.  The next sign designated as R4 is a loaf on a mat.  This sign stands for the word Htp and its possible meanings have been given above.  The next two signs designated as X1 and Q3 are complementary to Htp R4 and stand for the t and p respectively.  The name Imhotep is ii m Htp which is a verbal sentence meaning “he who comes in peace.”  Here are more examples of names that contain the word Htp:

The above names are clauses that are grammatically in the subject-stative construction.  Based on Sango’s claim and logic, this would mean that the above are sacrifices e.g. Ptah is a sacrifice, Amen is a sacrifice, and Montu is a sacrifice.  This is simply not true, as a stative denotes a state or condition.

Claim #3 – “Afro Centrics” are using the term out of context.

Sango also states “…for us to go and say Hetep as a greeting we’re saying to each other – sacrifice – or I’m saying to you you’re an offering when I say Hetep” [3:27].  This is simply not true.  The use of the word Hetep or Hotep by people today as a greeting is a shortened form of the fuller phrase ii.ti m Htp which means “Welcome in peace.”  The word ii.ti is a stative which is a verb form used to express a state of being in which its subject is, was, or will be.  In this case is a form of the verb ii «to come» making it “be come, welcome.”  In this form the stative is used as a wish or command in which you are requesting someone to come or an impreative telling them to come in the state of contentment, satisfaction, or peace.  To illustrate more examples of statives we have:

We find the following in coffin text VI 275t

In the above picture, Ramses II is greeted by Meret with Htp – peace. (taken at Karnak Temple) You see the phrase ii.wy m Htp in the 2nd column to the right of the female’s (Meret) body. The exact signs are ii M18 (flowering reed with legs), w G43 (quail chick), y Z4 (two diagnal strokes), m Aa15 (normally an Owl but its variant is shown here), and Htp R4 (mat with offering).

Is the word sacrifice a foul word?

Sango limits the meaning of Htp to “sacrifice” and believes that this word is foul.  We have to keep in mind that to translate, one is taking the semantic value assigned to words of a source language and matching those semantic values in a target language hence the word translate from Latin trans (across) + latus (carry) – to carry across.

Gen 22:2-3 And he said, Take now thy son, thine only son Isaac, whom thou lovest, and get thee into the land of Moriah; and offer him there for a burnt offering upon one of the mountains which I will tell thee of. And Abraham rose up early in the morning, and saddled his ass, and took two of his young men with him, and Isaac his son, and clave the wood for the burnt offering, and rose up, and went unto the place of which God had told him.

It’s concepts like these that influence the association of Htp “to offer” with something negative or foul.  Sango is speaking to a panel of people of the Hebrew belief systems and their reaction (e.g “wow, tell me more”) to his claims is to be expected.  Another member of the “Black Lotus Civilization” organization named Amun in the video teaches the word Htp means “to kill your grandparents.”  Foulness and the killing of grandparents is not supported by primary sources in ancient Kemet.

Htp associated with offerings of food and drink

The sign for Htp itself consists of a mat with a bread loaf indicating an offering associated with food.  We find primary artifacts of offering tables in the shape of the Htp sign with Sesh Medew Netcher (Hieroglyphs) writngs along with various foods.  Some of these tables have deeper holes used for liquids.  The overall meaning deals with offering in the form of foods and drink.  Here are some examples (click pictures to enlarge): 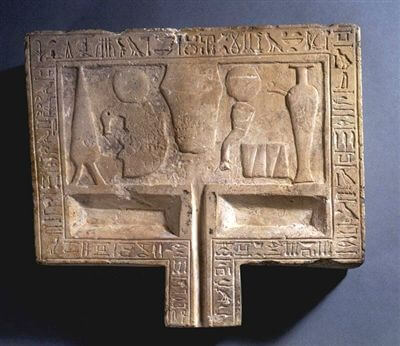 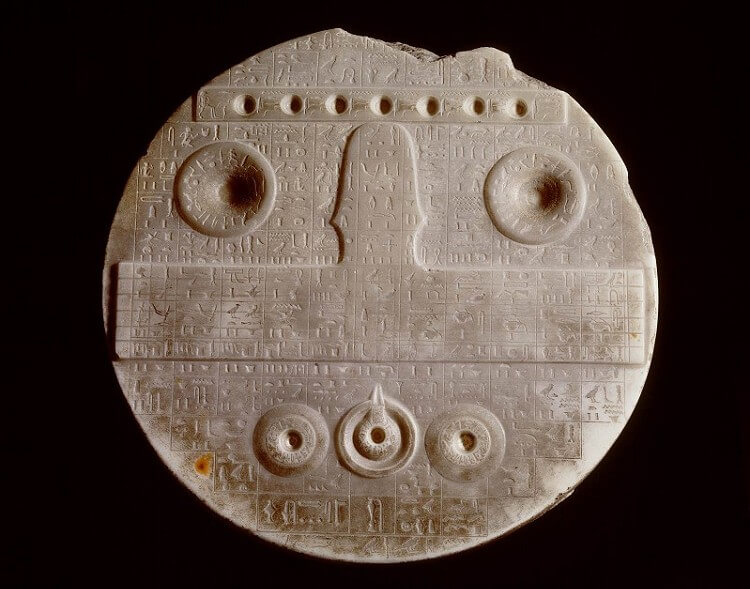 We also have what is called an “Offering Formula.”  Most tombs and funerary stela are decorated with some form of offering formula.  The formula is often called the Htp di nswt “offering + part of the verb ‘to give’ + king” which is usually translated as “an offering which the king gives.”  The formula consists of four basic parts:

Here is a primary example: (click picture to enlarge) 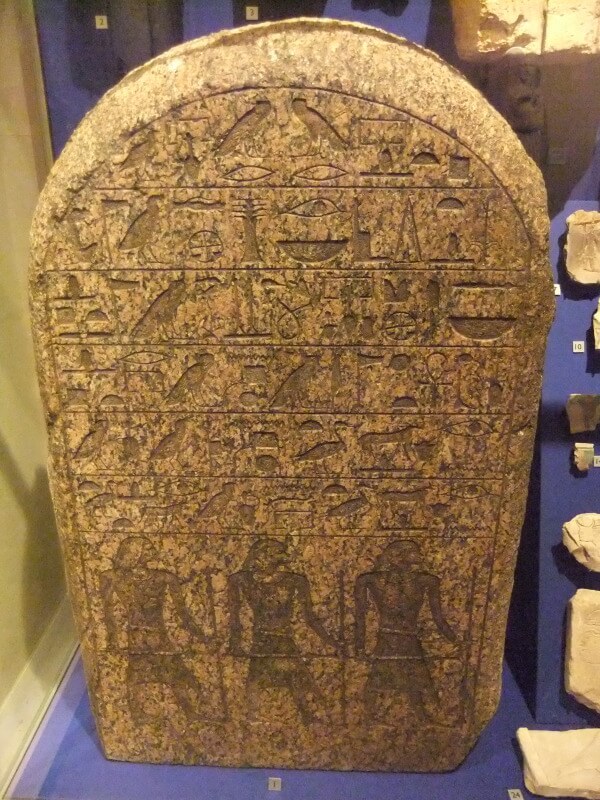 Translation: “An offering in which the king gives to Wesir (Ausar), master of Djedew, the great divinity, master of Abydos, so that invocation offerings may be made of thousands of bread, beer, oxen , fowl, alabaster, linen, clothing from the perfect and pure divine offerings on which the divine lives for the honored one, the steward Hetep.”

This example further shows the association of Htp with offerings and the nature of offerings.  Note that we find no such offerings of grandparents being murdered or anything foul as claimed by members of “Black Lotus Society.”

Helpful information toward a better understanding of the calendar systems in Ancient Kemet.   (6th Dynasty Old Kingdom Tomb of Mereruka ca. 2345 BCE)  Unlike…