Recently, a lot of attention has been given to the tomb of the ancient Egyptian provincial governor Djehuti Hotep (Thothotep) of Wenet (“The Hare Nome”) c. 1900 B.C.

Djehuti Hotep lived under the reigns of Amenemhat II, Senusret II, and Senusret III and was one of the most powerful nomarchs of the Middle Kingdom. His tomb is well known for the great quality of its decorations. For this reason, it is believed that Djehutihotep died prior to the strict measures reducing the power of the nomarchs that were established by Senusret III. Indeed, as their charge became hereditary at the end of the Old Kingdom, the nomarchs became local rulers effectively, although not nominally, independent of the Kings. This situation led to excesses in the exercise of power that worsened steadily during the First Intermediate Period. It was not until Senusret’s measures were imposed that such abuse of power later exercised by nomarchs, stopped posing a threat to the integrity of the Egyptian state.  Being part of the hereditary nomarchial system, Djehutihotep’s family held the office of local governor for several generations. Djehutihotep was the son of a woman named Satkheperka and an official named Kay. The latter was the brother of Djehutinakht and Amenemhat, both of whom became governors of the Hare nome, although Kay did not.  Djehutihotep was married to a woman named Hathorhotep. Her parents are not recorded in known sources. Several children of Djehutihotep are known.

The recent publicity comes by way of reports on several websites stating ” Scientists Discovered the Egyptian Secret to Moving Huge Pyramid Stones.”  See example at:  gizmodo.com  The article explains the experiements conducted from inspiration of what the ancient Egyptian already knew and documented on the walls of the tomb:

These experiments served to confirm what the Egyptians clearly already knew, and what we probably already should have. Artwork within the tomb of Djehutihotep, which was discovered in the Victorian Era, depicts a scene of slaves hauling a colossal statue of the Middle Kingdom ruler and in it, a guy at the front of the sled is shown pouring liquid into the sand. You can see it in the image above, just to the right of the statue’s foot.

What these reports and many other similar articles that speak about Ancient Egyptian carvings fail to do, is to give the readers a comprehensive translation of the text that accompany such carvings.  When viewing an Egyptian temple wall that contains both inscriptions and vignettes (images or depictions), those inscriptions and vignettes nearly always go together and must be viewed and interpreted as a unit.  One does not necessarily make sense without the other.  This is how the ancient Egyptians perceived it, which of course means this is how you are obligated to view it—if you want to make real sense of a “decorated” wall. You must immediately divorce yourself from modern attitudes, values, perceptions, and assumptions and try diligently to think like the ancient Egyptians would have. Most if not all Egyptian concepts are not in isolation and can be compared to more than one instance of the same expression elsewhere in Egypt.

The well-known scene of the transport of the colossus has made the tomb famous. The only other inscriptions of historical importance are those connected with this scene. They throw much light upon the power and organization of the government in a Middle Kingdom nomarchy, and, of course, the whole scene is of unusual archeological interest.  Fortunately, this scene had since the very beginning attracted the attention of explorers, who had made copies of it; but, since its rediscovery by Newberry, it has suffered a lot. Here is a reproduction of the entire scene (click picture to enlarge):

The quarries from which the great block for the statue was cut are located ten miles from the river in the desert back of el-Amarna.  The difficult road from the quarries over the desert, down the cliffs, and across the plain to the river at the modern village of Hagg-Kandil, had been in use since the days of Khufu, and Uni had transported stone upon it. Along this road the block was transported to the river, and then floated down-stream to Hermopolis-Eshmunen, where the statue was sculptured. 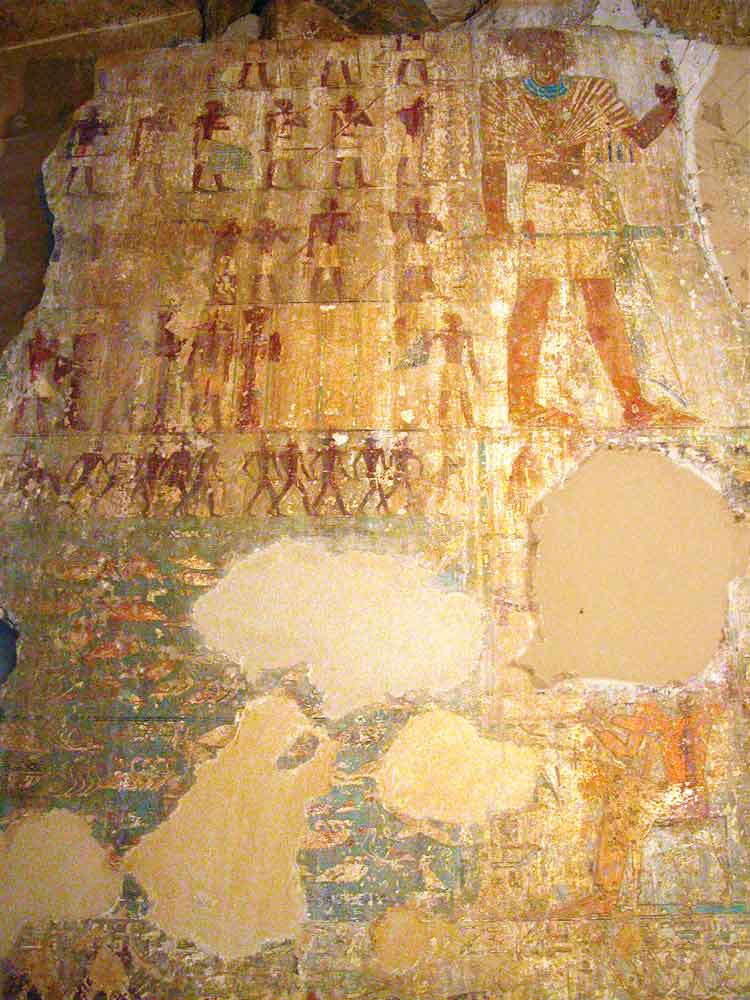 It was then conveyed to its destination, a building in the city where it was permanently placed. This event is depicted with great detail in the famous scene of the transportation.  Behind the statue march the “foremen of the work on this statue” and other officials, who are followed by Djehuti Hotep himself; accompanied by the following inscription:

The following is the transliteration and translation of the accompanying inscriptions:

Translation: “Following a statue of 13 cubits of stone from Het-Nub.  Now the road upon which it travelled was very difficult beyong anything, now it was difficult for the heart of the people who were dragging great things on it, because of the difficult stone on the ground, being of hard stone. I caused the young men, young men of the recruits to come to prepare the road for it, a road together with a team of necropolis stonemasons of the quarry, and the superiors together with the learned. People of strength said: ‘We come to bring it.’ My heart was glad and the whole city rejoiced. The sight was very beautiful beyond anything. An old man among them leaned on a child. Strong men together with weak ones, their courage grew and their arms grew strong. A single one of them put forth the strength of a thousand men. Behold, this statue came forth from the great mountain was more valuable than anything. Ships were equipped and filled with supplies, accompanied by my troop of recruits. Young men support troops accompanying it. Their utterances in praises and favours towards me from the king. My children were adorned behind me. The people from my district were shouting praises. When I reached the harbour of this city, the city was gathered rejoicing. The sight was very beautiful beyond anything. Chiefs were appointed in front, governors were appointed to judge in the residence of this city, and customs houses were established on the river. Their hearts had not thought of the things I did, making the lower chapel for myself, founded for all eternity, after this tomb had been finished, with its construction for all eternity.” 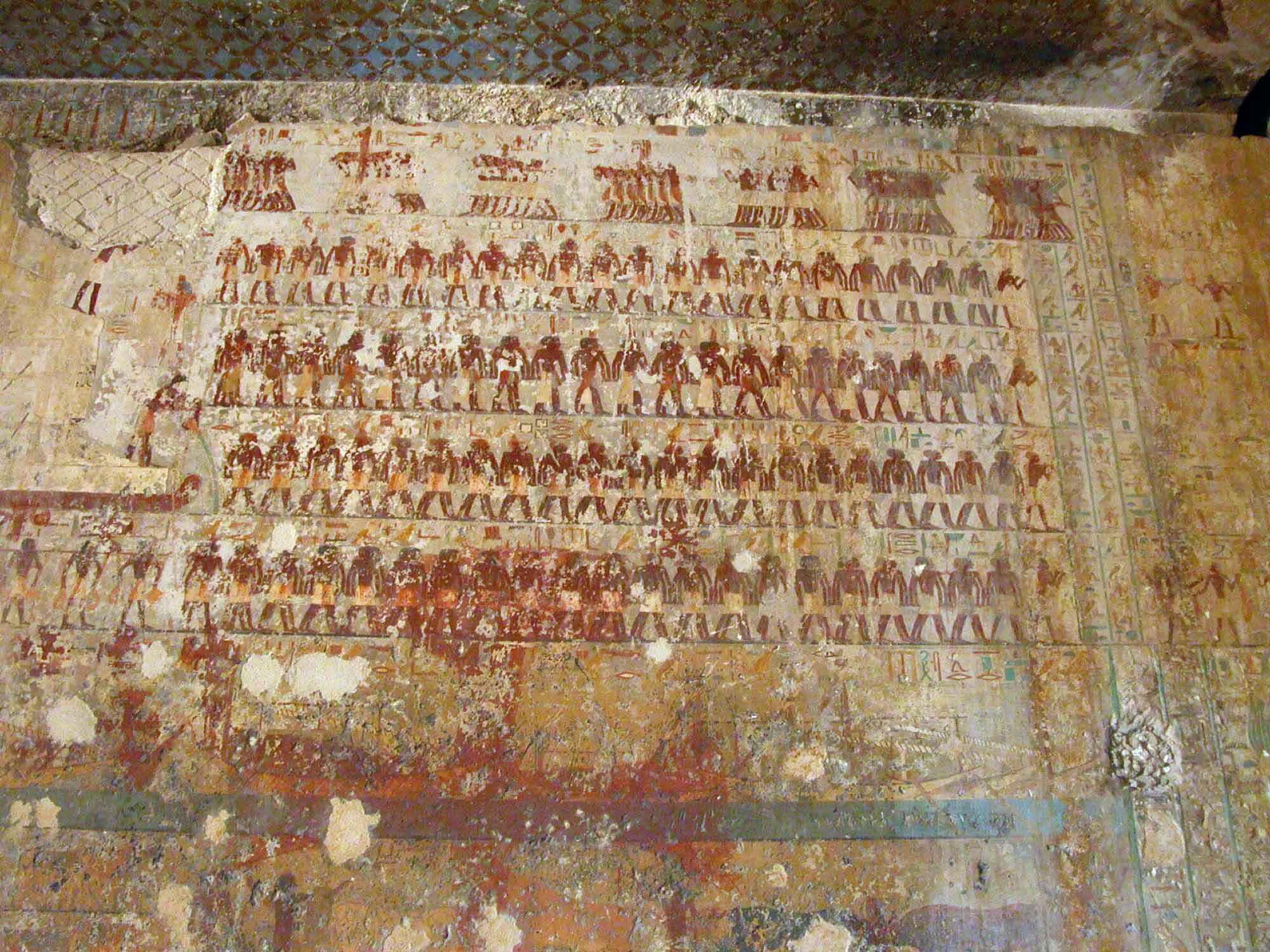 The statue is drawn by 172 men in four double rows, manning four ropes. The middle two rows consist of the priests and the soldiers; the outside two, of the youths from the two banks of the river. Each row is accompanied by an inscription as follows:

Translation: “Young men from West of Wenet come in peace, saying: ‘The west is in celebration, their hearts are glad as they see the monuments of their lords, the heir who grew up among them. His house was his father’s house in childhood.’

Translation: “A troop of young warriors of Wenet arrive in peace. Saying of the recruits of warriors made of their lord: ‘Heir who prospers by the favour of the sovereign, the lord. We come and make prosperous his children after him. We are happy with the favour of the king who is lasting and enduring.’

Translation: “A company of priests from Wenet come in peace, saying: ‘Beloved of Djehuti, Djehuti-Hotep, beloved of the king, beloved of his city, praised by all of its deities. The temples are in celebration, their hearts are glad as they see your favour of the king.’

Translation: “Young men from East of Wenet come in peace, saying: ‘My lord proceeded to Tchereti, Nemti rejoices over him, his fathers are in celebration, their hearts are glad rejoicing over his beautiful monuments.’

At the top and over the men at the ropes are groups of youths bearing palm branches. The inscription above them:

In advance of all these, oxen are being slaughtered, and rows of servants approach laden with offerings; inscription:

Translation: “Bringing forth the best of the offerings brought by his districts in Wenet for this statue of the Governor Djehuti-hotep, revered.

A man, standing on the knees of the statue, beats time for the men at the ropes. He has the inscription:

Translation: “Beating time for the soldiers by the foreman of Djehuti Hotep, beloved of the king.”

Before him is a man offering incense, whom the inscription calls the artist of this tomb. Beneath are men of the “estate” “carrying water,” and with them workmen “carrying planks for the dragging.”

Translation: “The love of Djehuti Hotep abides in the Hare nome.”

Here are actual pictures from the Tomb of Djehuti Hotep depicting the transport of the colossal statue (click on pics to enlarge): 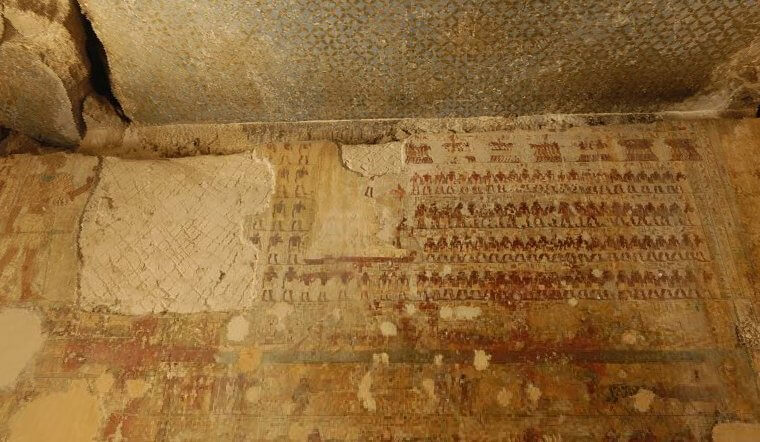 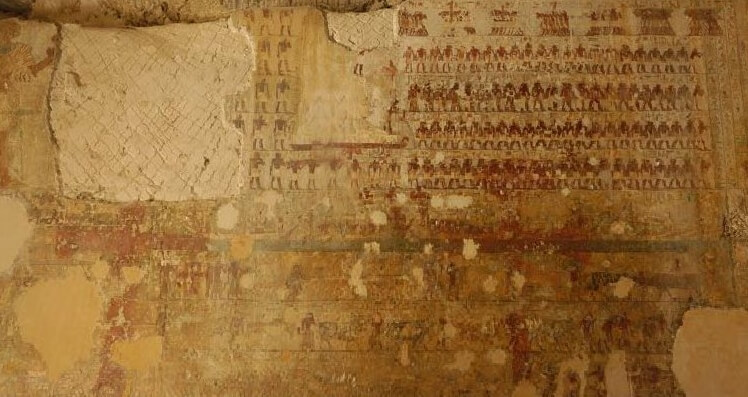 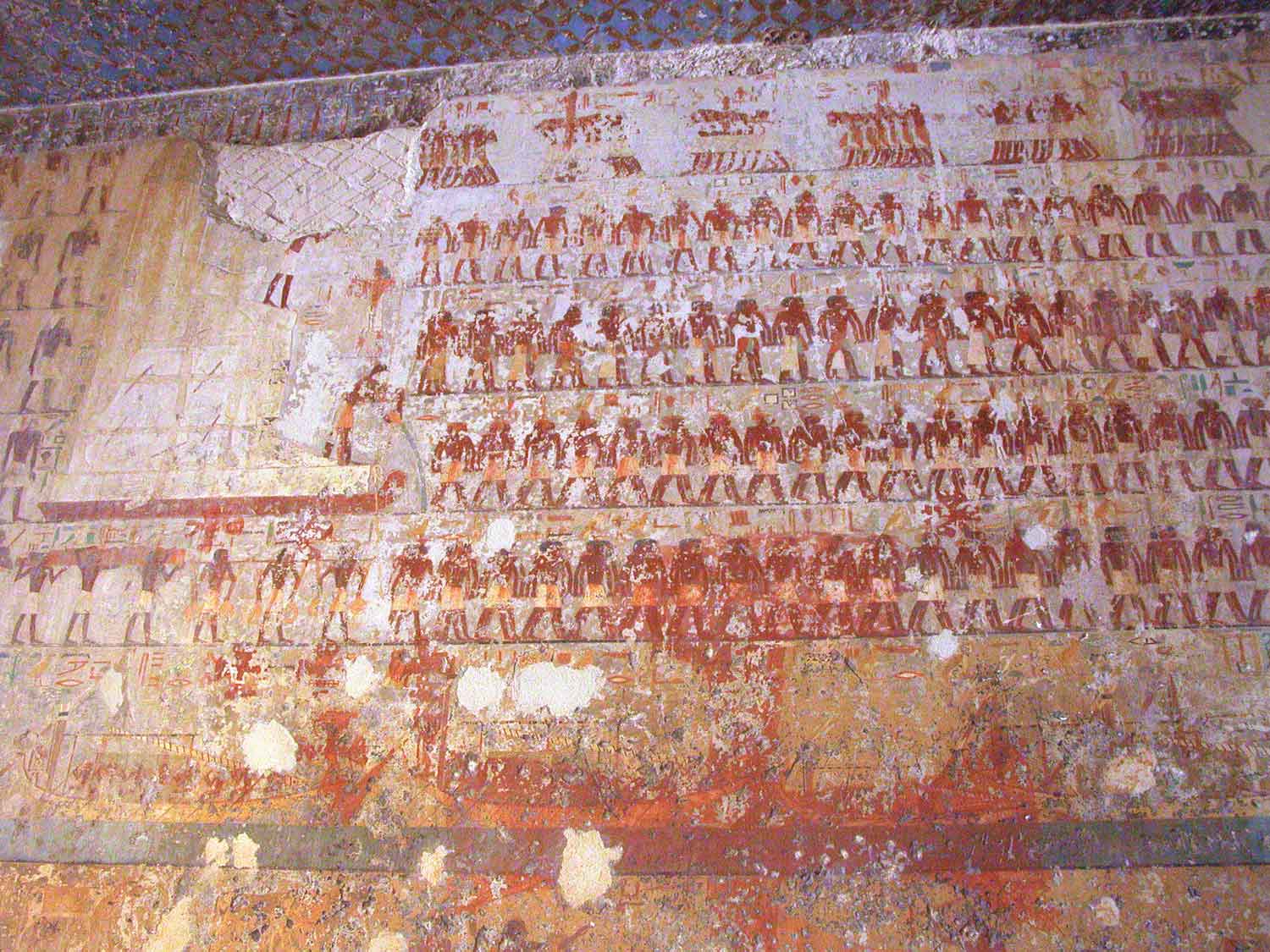 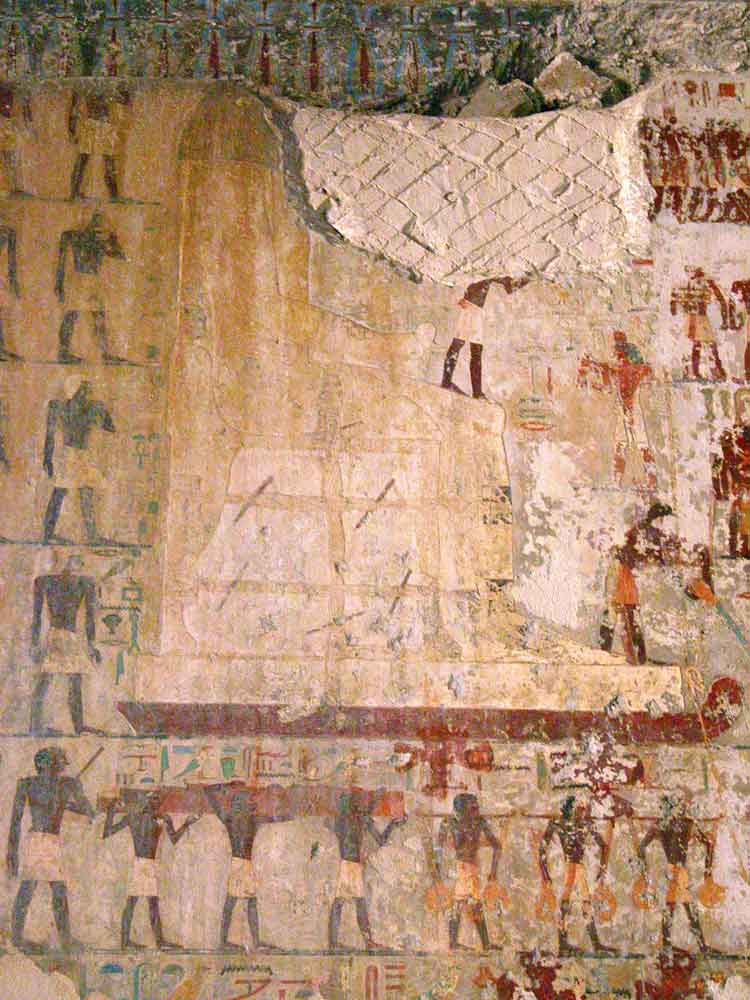 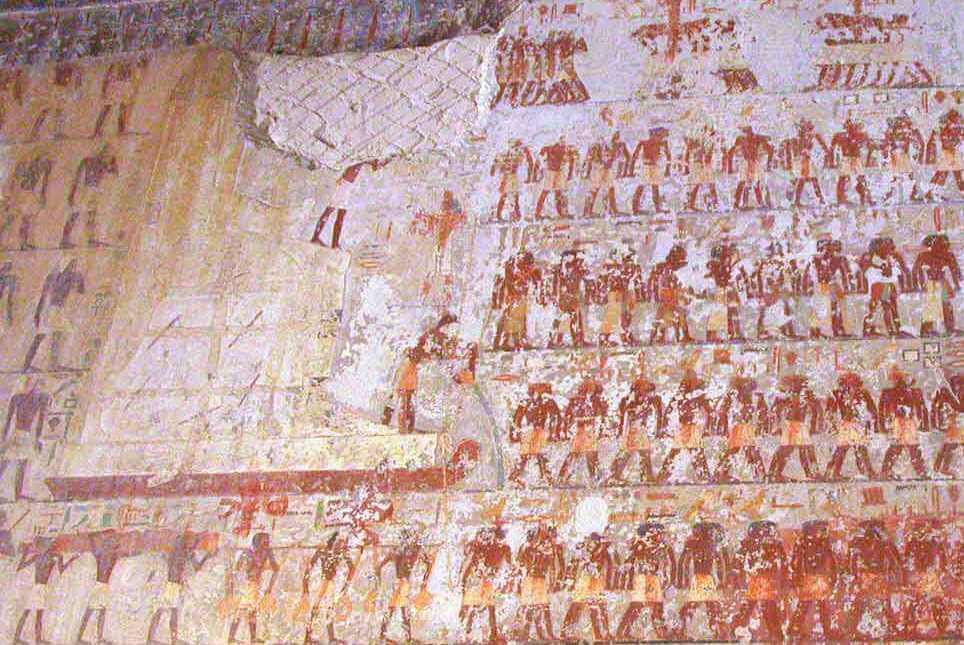