According to many UFO-logists, within the Temple of Seti I in Abydos there exists glyphs which depict highly developed crafts, specifically a helicopter, a submarine, some form of flying saucer, and a jet plane.

According to many UFO-logists, within the Temple of Seti I in Abydos there exists glyphs which depict highly developed crafts, specifically a helicopter, a submarine, some form of flying saucer, and a jet plane.

What do these hieroglyphs really represent?

The glyphs are a result of both erosion of the stone surface (evident elsewhere in the temple) and the process of filling in and re-carving the stone to replace some of the original hieroglyphics. The technical term for such a surface that has been written on more than once is called a palimpsest. The usurping and modifying of inscriptions was common in ancient Egypt throughout its history. The glyph here were modified at least once in antiquity, and perhaps twice. Some of the filling has fallen out in places where the older and the newer inscriptions overlap, and the result is unique and odd-looking.

The city of Abydos boasts a number of temples and the most significant of which was built by Seti I (Men Maat Ra) of the 19th Dynasty circa 1290 – 1279 BC.  His temple is the largest of the Abydos temples, built of limestone and sandstone blocks to an L-shaped plan, it has seven sanctuaries. The temple was not completed by the time of Seti’s death and was finished by his son Ramses II.  Here is a picture of Seti I (Men Maat Ra): 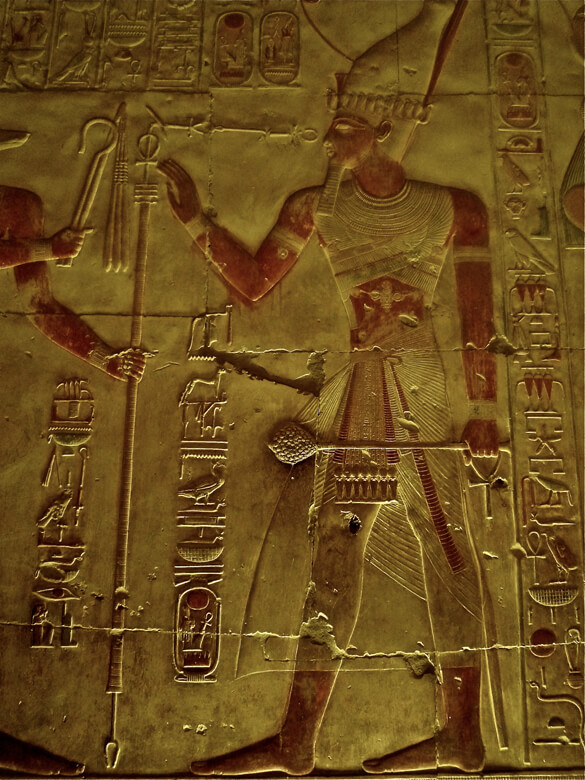 Seti’s son Rameses II hastily completed and decorated several sections of the temple and in some instances Rameses II placed decorations over those of his father.  The picture that is believed to be of space and air craft is one such re-decoration or palimpsest.  The text is part of the titulary (“title”) of Ramesses II which replaced the royal titulary of Seti I that was originally carved into the stone.  From the later half of the 5th dynasty on, the royal titulary consisted of five title or /rn wr/ “great names.”  These names expressed the power, might, and overall mission statement of the King. Often times, these 5 title were grouped as a long Royal Titulary in temples. There was an apparent change in the scale of the glyphs which also makes it difficult to discern.  Here is a picture of a wider view:

The glyphs in context (more of the entire scene).

Let us examine the original glyphs under Seti I with the re-carved glyphs under Rameses II.  We start with the so-called Helicopter.  The original glyph was the symbol of a Bow (T10A) which is used as part of the word /psDt/ and /psDtyw/ which are words dealing with Troops, Bowmen, and The Nine Bows which is why you also see 9 individual short vertical stroke lines (Z1).  We also see the raised bread loaf (X1) which represents the /t/: 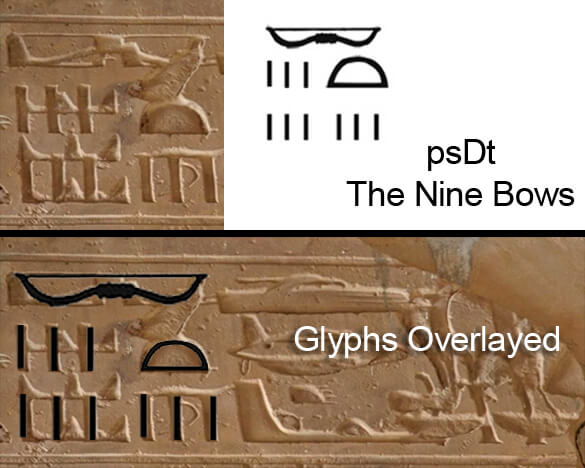 This section was re-carved and the (T10A)-Bow was replaced with the (D40)-forearm holding stick, (G45)-forearm/quail chick, (I9)-horned viper, and (Z7)-swirl which are used in the word /waf/ – “to crush, to subdue, to bind” as in conquer in battle.  We also see three glyphs (N25)-sandy hill used to denote foreign country called /xAst/ “khast”: 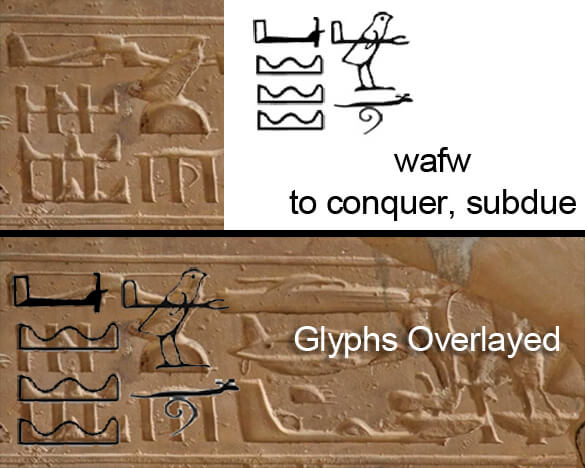 Moving to the next section toward the right we will see what was originally the word /dr/ which means “to expel, to drive out” which uses the glyphs (D46)-hand, (D21)-mouth, and (D40)-arm holding stick carved under the rulership of Seti I: 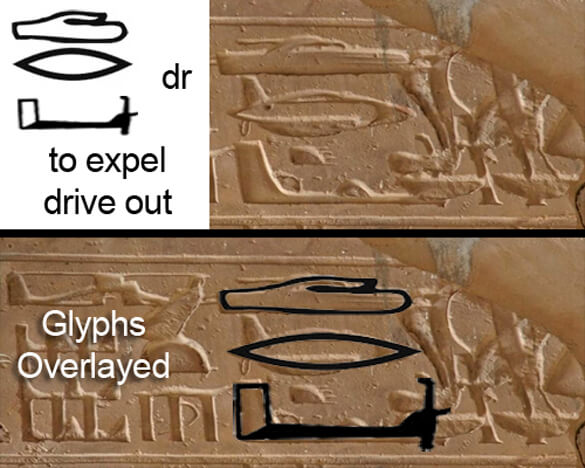 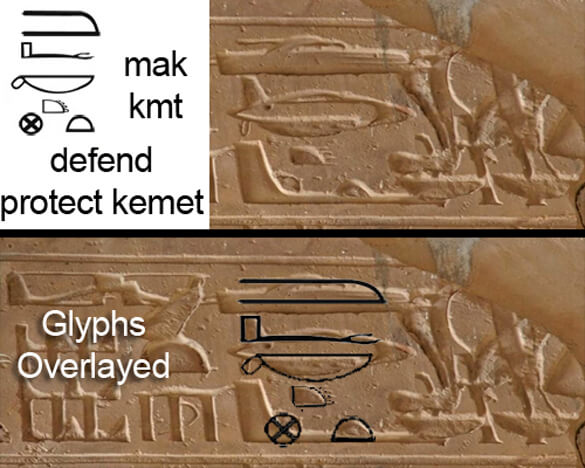 Before moving to the next section, the previous glyphs of the Bow, the Hand, Mouth, Arm with Stick shown above may be hard to accept for some.  Fortunately, within the same temple on ajacent walls, we find the same glyphs unaltered: 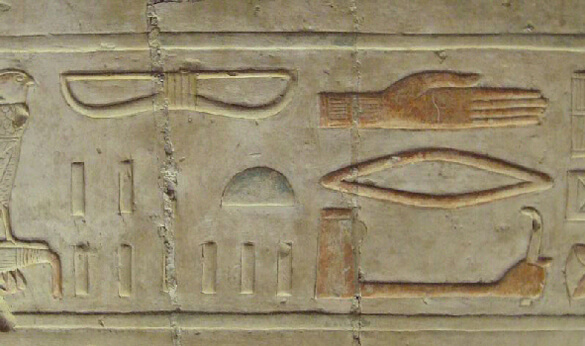 Now, moving to the next section toward the right under the rulership of Rameses II we can see the glyphs (G16)-volture and cobra on two baskets which represents /nbty/ “Nebty” meaning “Two Ladies” who are the protective “goddesses” of Upper and Lower Egypt: 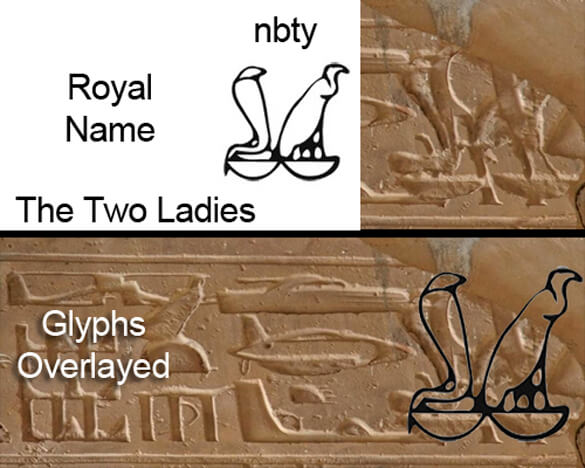 Here are all the glyphs put together as it was during Seti I’s construction and then under his son Rameses II’s re-construction: 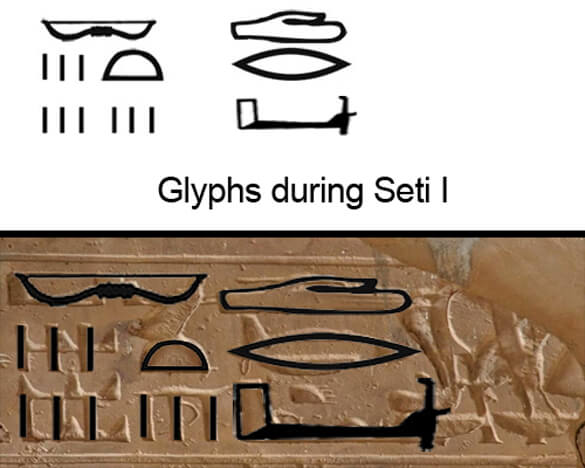 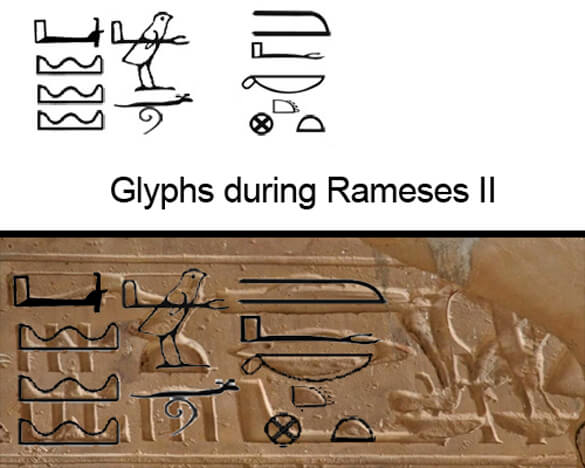 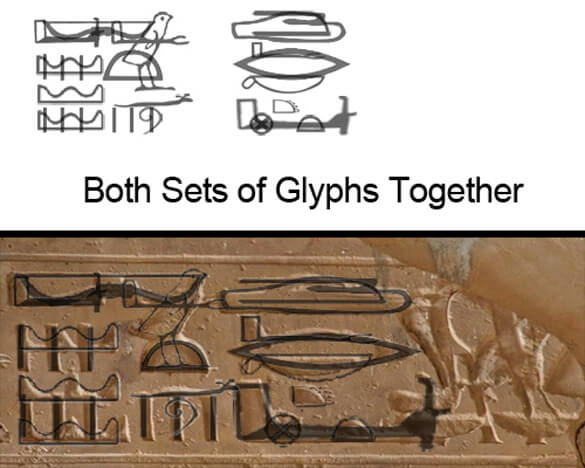 Here are additional pictures of a wider view and more of the glyphs:

Royal Titulary of Seti I

*** notes ***
Gardiner List Numbers of the Hieroglyphs are provided so that you may look up the glyphs yourself.  They are given within parenthesis for example (X1).